China is the birth place of tea, it's also one of the largest producers of tea, however China does not have a strong solid brand.

Brand is an image, a recognition of quality, a culture, also a champion of competition. What's said here is what a commercial entity projects its product image and build up a solid position in the market. The most successful cases are in the western world, IE Coca Cola, Nike, Starbucks, and Lipton of course. The sad thing is Lipton is recognized, but not so much of its quality to some discriminating tea drinkers. You know who you are. :P I supposed it's even more sad that most people do perceive Lipton as an image of quality. One day I'll get killed by a Lipton assassin.

Lipton is a British company, however given the history of colonization, we can pretend Britain did produce tea on its soil. If we compare China and Britain, Lipton is far better in branding itself with few competitors. China on the other hand have many private labels, but not one dominating brand which I can think of. Tian Fu perhaps?! Tian Fu is arguable. I can visualize many fingers pointing at me already.

There are 70+ thousand tea factories in China as of today. Each one is competing for market share locally. When it comes to global market, there is not a contender can measure up to Lipton. 75% of green tea are from China, why are they labeled as Lipton green tea or Tazo green tea instead of say EGCG green tea -"East Green Camellia Garden"? Just a fake thought. :P
Posted by Imen at 4:25 PM 4 comments:

Will we run out of tea?

In 2006, world tea production is 3.6 million tons, however consumption in 2006 is 3.64 million tons world wide, assuming the extra 40k tons of teas were reserves from previous years. If the trend continues, will we run out of teas to buy? Nooooo!

In 2007, world wide tea production increased by 3%, however consumption increased only 1%. Supply and demand will correct itself.
Posted by Imen at 4:09 PM 2 comments:

A while ago, I got a small piece of black tea brick from a customer. It twigged my interest, and I bought a whole brick which looks similar enough for a taste comparison. The flavor turned out night and day in difference, which confirms the little brick from Dakota is indeed much older and now fine tuned by precious time.

This brick is nothing more than a simple black tea, sort of a fresh version of lipton black tea. I am sure this brick will be tucked away for a while, perhaps it will too turn out to be a silky smooth nectar of nature in 20 years. 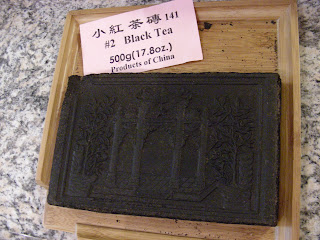 Many customers of mine give me suggestions on how to improve my business. I appreciate their inputs and endless new information from every corner of the world. I learn quite a bit and stumble upon valuable information every now and then.

Today, a very dear lady customer of mine stopped by told me about a "brewing" product she tried. A bottled tea tastes like wine. It cost $10 a bottle and it's still in testing stage. She suggested I carry something like that when it's in the market.

The idea urks me. It sounds like one of those Monster drinks that the marketers tell you how good it is for your health and what can it do for your "brain", except it will turn you into a dummy slowly.

It's sickening that some people try to ride the wave of "tea" and make bank. I refuse to get suck into the RTD market. Do we not learn anything from the fast food/beverage diet that American health are suffering now?! Call me stubborn, I'll not carry RTD tea no matter how much money I might make.
Posted by Imen at 6:51 PM 11 comments:

A friend of mine acquired a Jian (10 tongs), of this cake a while back. This cake is made of pure Ban Zhang wild arbor leaves, using 8582 formula to compose this cake commemorating the 20th anniversary of the 8582 recipe, produced by Zhou Yong. Total of 100 Jian was made.

8582 recipe was created by Zhou Zong, brother of Zhou Yong. Zhou Zong was the founder of Nan Tian Company, one of the biggest tea traders in Hong Kong. Zhou's father was a political activist since the 40s and a jewelry trader, he also contributed to the invention of Wo Dui method to produce cooked pu-erh. 8582 was specially made for the Hongkong market and solely distributed by Nan Tian Co.. 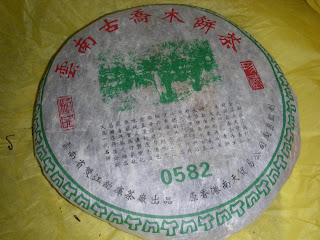 Nei Fei is a big leaf hot branded with Nan Tian (South Sky). I have seen fake ones stamped with red ink. Beware! 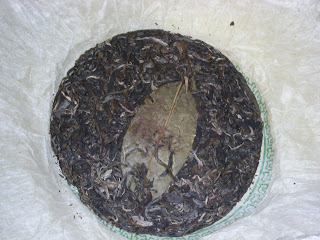 Taste is lovely Ban Zhang floral, sweet teas lasted many infusions, open leaves are strong and big. Compare to Ban Zhangs I have in stock, it's definitely a notch up.
Posted by Imen at 1:47 PM 3 comments:

I apologize that I have not been posting much lately. It's one of those mind clogging week where there are so much else away from tea occupies my mind and time. 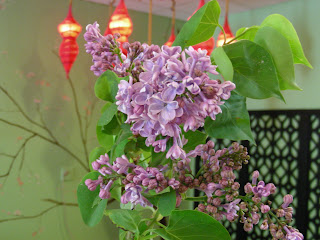