Time to take out your forgetten Phoenix Dan Cong teas

Phoenix Oolong tea has a lot of wild characteristics even though has been cultivated with human attention for 8 to 9 hundred years. The wildness has been tamed and fine tuned beautifully. It's delightful to drink even the newest harvest. However it gets even better with time.

Every year around Chinese New Year, DCs from last Spring taste better over all, smoother, sweeter and rounder than fresh in the previous year. Fresh harvest are more aromatic with a edgy texture, with the exception of old bushes. Even old bush teas improve texture after 10 months. Commercial teas being more dramatic in improving flavors. Locals prefer drinking 1 year old DCs or older. If you had a DC that's bitter or harsh at the time you purchased it, give it a try again around this time. You might find a nice surprise.

Why such a transformation in relation to time? Phoenix oolong is composed of 38% disolvable chemicals in each leaf. As soon as they left the tree, these chemical compounds begin to oxydise, generating new additional chemicals, wilting for hours in the sun and cooling in shade ensure further oxydation, the right moisture content to provide the right amount of oxydation at the right pace. Each tossing, cooling, kill green, rolling proceedure provides the right stage for the chemical compounds to react. 2 to 4 times of roasting prepared the preliminary production called Mao Cha. The entire process takes 36 sleepless continuous hours from the time the leaves arrive. It takes another 4 to 8 roasting to finish off the Mao Cha before it hits the retail stores. The last 4 to 8 roastings are done through out the year. First one is a few weeks after the mao cha production in general. The last is around Moon Festival (mid to late September). Roasting during the year is to reactivate the glucos transformation. After 3 to 4 months rest from the last roasting, the edgie texture is significantly mellowed out. If aged for years with occasional roasting every other year or 2, your DC will be silkie smooth like an old lover. :)
Posted by Imen at 11:21 PM 3 comments:

What is Cha Tou one may ask? Literal translation is Tea Head. Does tea have heads and tails?! It means the odds and ends of something, tea in this case. For Dan Congs, Cha Tou are older leaves harvested in each season. Better ones are the Spring harvest of high elevation trees. Pu-erh cha tou are small batches of teas left after meeting the production quota. If 10,000 cakes of 400 g each are made, what's left are either call mao cha or cha tou depending on the condition and quantity that's left.

Chinese literature insinuates meanings deeper than its literal mean in daily use. Picture cutting up a whole fish or a chicken with head, skin, feet and gills, the best part of course is the main body and served as the main entree, however the head and tails are the "odds and ends", applying to tea production, the odds and ends are less sought after are called cha tou - tea head/tea tail, usually in small batches. Cha Tou-tea head is used most often as the tail is less appealing than the head (to some). :D
Posted by Imen at 1:36 PM No comments: 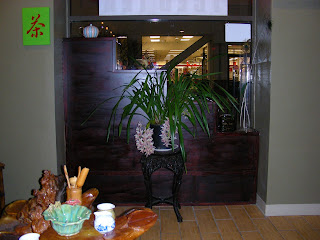 Chinese New Year is coming very soon, next Monday the 26th to be exact. It's the most significant holiday of East Asia, China, Korea, South east Asia and others. Luna calendar is rather precise base on the aliment of the sun, moon, other planets and stars. As the world turns, the climate changes and its direct impact to cultivation has been recorded for millenniums. Luna calender predicts climate changes day by day. When is time to sow seeds, when is time the birds come home from winter, when is time flowers bloom, etc. 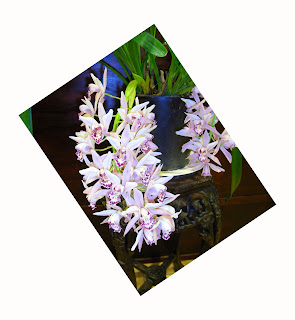 In southern California, weather is evenly warm through out the year. Flowers can be seen all year round. One of the most important elements as part of the new year festival is flowers. Fresh flowers are must have as part of the decor, potted plants or fresh cut flowers are equality popular. Canton is cooler than LA, however being in the subtropical climate, it's one of the earliest spring arrival spot in China. In my childhood days, new year's eve dinner was an elaborate 9 course meal with family members, it's the one meal no one should miss of the year, followed by an evening outing to "flower street" well into the night. Public parks in China is quite different from American parks. Parks in China are man made architectures blended into nature with water features of large ponds and streams, hills, rocks, landscaping, bridges, pagoda and pavilions of traditional Chinese styles. During Chinese New Year, parks are showcases of million flowers attracting visitors from city and country side. My parents took us to the park each year, perhaps this is the early feed of my flower obsession.

One of the designated date in the Luna calendar is Feb 2nd (some time in March of the western calendar which we use today) as the birthday of flower fairy. This is the day we welcome the flower fairy. The arrival of the fairy represents blooming of many flowers, it also represents the waking up of plants from winter rest. An other name for this day is Hundred Flowers Birthday, it's blooming season for many plants, hence they all share the same birthday. To welcome the fairy, ladies and young girls cut up red papers in lantern shape to hang on tree branches or wear as hair pieces. The one and only Queen in China Wu Ze Tian ordered female servants to pick hundred flowers, mixed with grain flour then steamed into cakes for her court ministers. 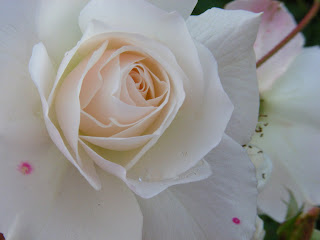 Hua wu bai ri hong - flowers red no longer than a hundred days, meaning nothing will last forever. Although this tradition has a long history since Tang dynasty, its fate is not far from blooming flowers, Hua Zhao Jie is unheard of by many today. Its presence declined then vanished after Qing Dynasty, war fair is the #1 murderer of tradition and culture, ignorance of rulers are to be blamed as well.
Posted by Imen at 5:18 PM 1 comment: