Drinking good tea in anyway, even the least attentive way is better than drinking mediocre teas in the best way!  Great tea and clean good water in anyway will guarantee a better cup than lesser quality tea made in the best tea ware in the most desirable environment. 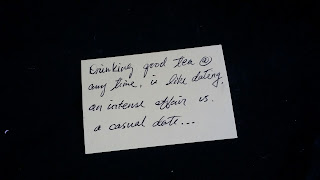 At my early tea years, I felt the best teas deserve time, attention and care in order to maximize the value of the tea, as we all know great teas is worth gold.  So the old belief was we can drink less quality teas when I am busy or outside of my tea domain where everything is there, by less, it is never the bad teas, just less than great, mediocre/good teas with a price to justify.

Frequent travel with a bottle of over steeped teas, I noticed my body automatically dismissed the idea of drinking less than great teas, because there are essences in the great teas are usually lacking in lesser quality teas.  The result of such absence led to unsatisfactory due to lack of energy, and this is pure physical sensation, tastes buds are not satisfied, my body was not effect the way it prefers, warm, soothing, nurtured, and calm.

This comes to the bottom line of the purpose of tea drinking, anything you put in your body, is for the benefit of your health, for your own well being.  When it is working and working well for your body and YOURS in particular, the body sensation takes over your brain, it is not just the taste of the tea or where it comes from or how it's made, and how much it's worth.  It's what you are putting in your body, more nutrients and energy at any time is better than less in the best presentation.

I use Wikipedia quite often, it's a quick and easy way to get a glimpse of a new subject. And I believe in the contents, blindly, until I got to the Yixing clay teapot page.

Five Yixing clay teapots, in styles from formal to whimsical.
Yixing teapots are meant for use with black and oolong teas, as well as aged pǔ’ěr tea. They can also be used for green or white tea, but the water must be allowed to cool to around 85 °C (185 °F) before pouring the water into the pot. Yixing teapots absorb a tiny amount of tea into the pot during brewing. After prolonged use, the pot will develop a coating that retains the flavour and colour of the tea. It is for this reason that soap should not be used to clean Yixing teapots. Instead, it should be rinsed with fresh water and allowed to air-dry. A studious tea connoisseur will only steep one type of tea in a particular pot, so as not to corrupt the flavour that has been absorbed.
Yixing teapots are smaller than their western counterparts as the tea is often brewed for only a few seconds before it is served to guests.[citation needed] Reusing the same tea leaves multiple times, the first brew of the tea leaf is usually used only to clean tea, teapot, and cups and is not to be consumed. Chinese people traditionally drink from cups that hold less than 30 ml of liquid and are simply repeatedly filled so that they may cool rapidly but can be ingested before the tea becomes cold.


I find it insufficient and misleading in more ways than it led on.  While other aspects are all debatable and mostly personal preferences.  One thing most tea drinkers find it fascinating but so wrong for one's health is the concept of a yixing teapot captures the flavor and color as a coating, so far as it can make tea without using any tea leaves.  It became a game to build such coasting, while it is acceptable to coat the outside, but the inside?  Well, the BIG question is, will you drink it????

It's nothing more than poor hygiene.   We first need to know what that layer is.  Clay teapot are porous, higher temperature fired, less porous, lower temperature fired, more porous.  Clay is a combination of many varieties of minerals!  The pore is where it traps tea and react CHEMICALLY with the elements in tea, later oxidize in dry condition, which means there are tiny residues film the wall and tugged inside the pores in the teapot.  Year after year, it adds up, we call them tea stains, so by adding water alone, it will stain the water.  The visual effect might become an indication of a time investing hobby, but again, is it something you want to put in your body???

Things happen, like a film of tea stains over the years, you are the one to determin is it good for your health!