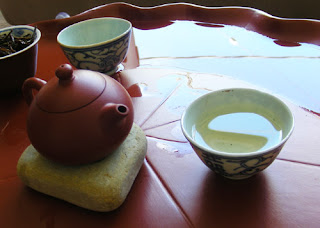 Yesterday my Korean friend called me up in the morning, interested me in going to the Fowler museum at UCLA. A temporary exhibition of Koran potteries by 5 contemporary artists and burial figures from the 19th century is currently held at Fowler. I jokingly said to my friend, let's take a pottery making class afterward.

Three other exhibitions are held at the same time. Textile making from Indonesia, Masks and other ritual figures from mostly Africa, south America and southeast Asia, silver ware of the 1800's and 1900's from England. I found 3 eye catching silver cloisonne pieces made by Russian silversmiths in the mid to late 1800's. 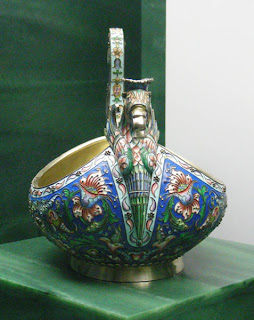 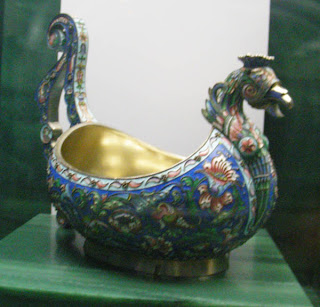 Upon returning to home, I found a package from China. Although I have expected its arrival for a week, but knowing the content of this package, excitement can't be subsided.

After a busy yesterday, I was not ready to drink this tea last night. As I woke up in the morning, taking the time to prepare at a spot where I can pay full attention to my tea, a cup of Jing Mu Xiang is rewarding.

The color is unusually light, and deceiving. As I took a sip, a tingling ginger spice sensation can be felt on the first half of my tongue, it lingers for a long while, even as I am typing at this moment. It's not floral fragrant as many other Dan Cong oolong, although subtly fragrant. The money is all on the after taste and sensation. It's so thick, almost pasty as I sip it. A layer of buttery film coats my mouth for a long time. Without breakfast, my system is clean to take in the effect of this tea, and sure enough, I feel bloated after only 3 little cups, as I just had a meal. My eye balls are popping out right now!

Along with a small 10g sample of Jiang Mu Xiang, Tian Yi Xiang-Heavenly Leisure Fragrance, 08 Chuan Du Lao Ming Cong---the very first old bush Dan Cong that knock me off my socks in 07 and has since made me an addict, rather spend all my savings on tea rather than buying clothes and purses, devilicious fairy of tea tree! There are more of the 05 Ba Da wild Pu cake came with the Dan Congs.
Posted by Imen at 9:36 AM No comments: 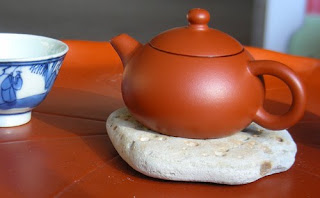 I have been raising this little Chao Zhou Zhuni pot for about a month with old bush Dan Cong teas. A layer of shine is my pride and happiness. :D
Posted by Imen at 1:41 AM No comments: 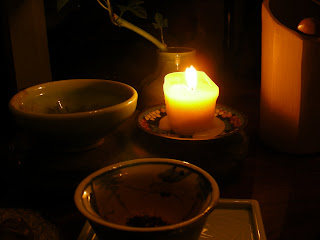 I should be at a party in Hollywood. Instead of having fun socializing, it's a night for staying in shells of my oyster world. A sandalwood incense, a flickering flame, a pot of 1978 Dan Cong, allow my mind travel back in time to where it belongs.
Posted by Imen at 10:35 PM No comments:

Thank you all readers! My blog has received the top 40 tea blogs award in 2010. I am very grateful for your patronage of the blog. Your encouragement is my drive to continue writing about tea "regularly"! As I should have keep up with posting materials in the past couple of months. Change of work load, change of store location caused plenty of unsettling emotions. I apologize for the lack of posting lately. Everything should get back on track shortly. 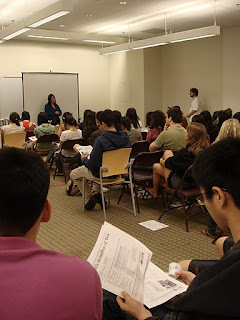 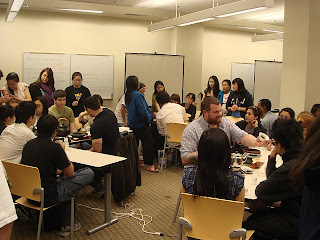 This article has been long over due since the second class at UCLA in May. My world has been a whirlwind due to the move of the store, my mind is still up in the air as cloud of dust waiting to be settled.

First of all, thanks to all the organizers and members of NCAM at UCLA, special guests Jason, Davin and Saneou, for providing the opportunity and time to make this a successful evening. The tasting part of the night was the highlight. Look forward to another year of tea event with greater success!

The second year agenda was a bit tougher to choose compared to the first year. Simply because we have new and repeat students, new comers needs introduction, repeat students wants new contents, skipping intro is not possible, yet same material might bored the others. I don't think I have done this well this time around. Question session was omitted as well.

I feel that the goal I want to achieve when teaching young groups is to introduce and better yet inspire the young minds, invite their inquisitive minds to explore the world of tea, get involved with tea, experiment with tea after I leave the classroom, or at any moment in their lives later on! Next time one holds a cup of tea in hand, they remember a thing or two from that evening, why they pick the tea they are drinking in the cup!

I can't teach everything in 40 minutes of speech, I can't expect everyone to remember everything I said in that 40 minutes either. My role is to excite the minds to learn more after I left, to let everyone know there are so much to learn and enjoy with tea if willing. It's out there, it's available, it's deep, it's wealth of knowledge, it's wealth of health waiting for anyone to reach and grab.
Posted by Imen at 12:45 AM No comments: