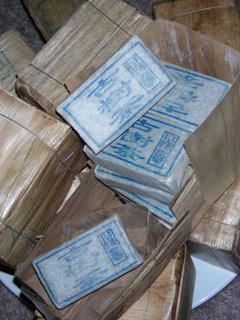 Here are my bricks, 10kg of 2006 Lao Ban Zhang pu. The excitement I feel about these bricks is similar to an opium addict found a supply of the gooey paste in bricks on the opium bed.

Speaking of opium, tea and opium got mingled together starting late 1700's, the British forced opium import to China to pay for tea consumption instead of paying with silver, triggered the famous Opium War in mid to late 1800's. The lost of Hongkong, forced open trading in ports of Guangzhou, Xiamen, Ningbo and Shanghai, the nation was brutalized by the British and other European countries, lingering resentment of the western countries are still among many Asian countries in addition to China. It was the most difficult time in all China history.

Tea has been a luxury item highly sought after and fought for for hundreds years. I can't imagine not indulging every sip of tea I can get my hands on. I treasure my tea more than diamonds and gold! Tea can nourish your soul, enrich your spirit, cleanse your flesh. Beauty within is the ultimate endeavor.
Posted by Imen at 8:16 PM

That's quite a lot of bricks! It's Mengku Lao Ban Zhang, right?

Hello!
What a nice batch it is!
It makes me want to cry (or jump up with JOY;-)).
Your pictures are so good, they make me feel, as if I've participated in this nice tea experiences.
Thank you.

Oh, thank you, Imen, but I wouldn't want to take it away from you. Perhaps if and when we meet I can taste it with you. After all, we live in the same county. :) Thanks again!

Let's do that in March.

Do you mind taking a few pictures of the banzhang brick, especially leaves that are wet (I'm sure you'll be drinking them at some point?). I'm quite curious about this thing.

Will do in the next day or so.