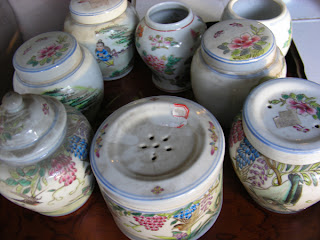 Tea is like a can of worms, once you open it, it doesn't end. Tea ware is a big part of tea, pots, cups, jars are some of items a tea drinker accumulates over time. I went through a period of cup hording, maybe still do. :P

Following cups, jars are my favorite collectibles. I may like jars more than pots, simply because I can't use too many pots, but I can use endless number of jars, for tea, grains, spice, herbs, other cooking ingredients, etc... 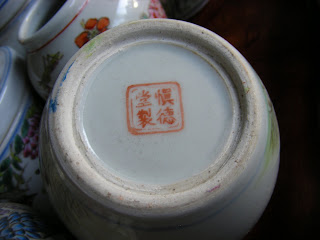 Last week, I got a hold of a small lot ROC period jars through the old Jing De Zhen Factory. Shen De Tang was an imperial kiln started during Dao Guang Period (1820-1850). Before the end of Qing period, all productions were designed and made of superior quality, hence highly valued in the collectible world. After Qing dynasty ended, all imperial kilns stopped producing imperial grade items. To remain in business and feed the family, civil china wares composed a large part of the production. This trend continued until 1949. The new government took over, combined all manufacturing studios into one central company. All products were marked Zhong Guo Jing De Zhen in Chinese, MADE IN CHINA, and an assigned batch number or alphabet. 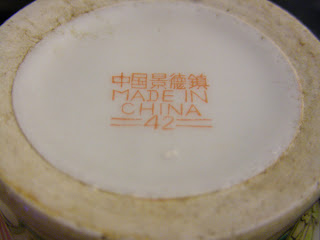 In 1985, new privatization regulation is part of the new economy evolution, Jing De Zhen factories once again are in private hands. I met an older gentleman whom took over 6 factories and the entire warehouse collection back dated not knowing when. Over 100 thousand boxes of china ware in deteriorated cardboard boxes. Mid to Late Min Guo ROC through 1985 is a safe estimation of the age (1930-1985).

These hand made and hand painted jars are distinctively ROC style. The paint color is also of old formula. Bottom marked Shen De Tang which makes them as least 62 years old. They are so lovely, incorporating a time piece element into tea life is a story of romance in itself.
Posted by Imen at 11:29 AM

Do you know the significance of some hols in lids? Is that jars for tea too?

The holes are designed for crickets. Cricket fighting was a national pass time for the royal family members, and the rich and famous, is a form of gambling.

I would not recommend using a cricket jar to store tea. :)